There are scant reports of tumors in ground squirrels, while there is a bulk of literature in other rodents belonging to their family such as the woodchucks. Hepatocellular carcinoma has not been previously described in this specie. In this article we report a case involving a two year old female European Ground Squirrel (Spermophilus Citellus) that was presented for sudden onset of respiratory distress. At presentation the patient was quiet, alert and responsive, with evidence of increased abdominal respiratory effort. At physical exam an abdominal mass was palpable in the abdomen. Chest radiographs evidenced multiple nodular lesions within the lung fields. Overall, the condition was consistent with metastatic lung neoplasia. The owner elected the patient to be managed conservatively with bronchodilators and corticosteroids. The squirrel had transient improvement of its symptoms for one month and then its respiratory distress worsened leading to euthanasia. Necropsy evidenced a large liver mass and multiple metastatic lung nodules.Hematoxylin-eosin histopathology and immunohistochemistry were consistent with hepatocellular carcinoma, while the lungs showed multiple metastases from liver carcinoma. Clinicians should include metastatic lung disease among the differentials for respiratory distress in ground squirrel. 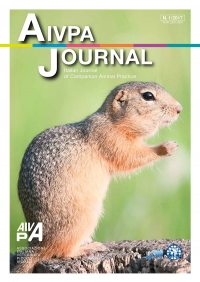